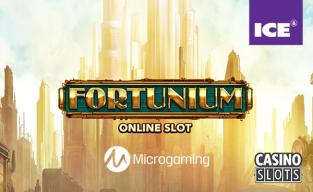 The International Casino Expo 2018 is going on right now, and Microgaming made a big announcement that has a lot of people talking. It centers around a slot that they're looking to release later this year, and they gave the public their first look at it. This is all about the Fortunium online slot, a game with a steampunk theme and a lot of room to be one of their biggest releases this year, exclusively provided by an independent game studio called Stormcraft studios.

About the Fortunium Slot

One thing to know about this game is that it's designed to work extremely well on mobile devices, and that flies directly in the face of the general consensus when it comes to games with five reels and five rows. Titles with this much screen real estate typically don't work quite as well on mobile because of the way they tend to form more of a square than a rectangle. Microgaming has it covered, however, and that's an important point about this new release.

Aside from that, the game is looking to have a ton of features. This includes Mystery Reels, Stacked Mystery Symbols, a Win Booster that can give you increased payouts and a number of other innovative ideas. The general premise of the game is that there is a city called Fortunium, and it's the land of opportunity within a steampunk environment. You can come here in the game world to try to make your fortune, and that's not far off from what players will be doing to try to run up their own fortune on the reels.

To show just how far Microgaming takes their showing, at ICE 2018, they've had a steam-powered ice cream buggy complete with characters from Fortunium hooking people up with a gin and tonic sorbet or a salted caramel whiskey ice cream. It's not hard to tell that they're looking to make 2018 their best year yet, and they've made a strong step in that direction with the debut of this new game and their general presentation at ICE.

Microgaming has more competition than ever. They provided the software for the very first online casino in the mid-1990s, and they're still here now defending their spot as one of the very elite, top-tier software developers in the industry. It's going to be tough because the competition keeps getting stronger and stronger, but they seem to be up to the task.

Press Release, Microgaming Unlocks the Doors to the Golden City of Fortunium at ICE 2018 microgaming.co.uk, February 7, 2018