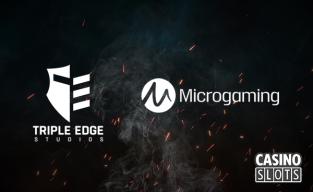 Online casino games developer Microgaming has just announced a partnership with the brand-new Triple Edge Studios, who will supply their slots range to the company. The announcement was made at the ICE Totally Gaming 2018 show which took place in London from 6th - 8th February, and the deal starts with Triple Edge Studios releasing their Playboy Gold slot machine into Microgaming-powered casinos.

Some Background To The Agreement

Microgaming are looking to shake up the online slots market in a new way that will benefit smaller game studios, who will get wider exposure of their ranges, while expanding the selection that Microgaming can offer to clients.

This is planned to be the first of several similar deals, with independent studios offering varied types and diverse styles of slot games. Microgaming clients come from around the world and these games will be targeted to specific regions to cater for local tastes.

Formed in 2018, this brand new games developer has already released Playboy Gold and the themed Halloween slots, supplying them exclusively to Microgaming. The studio was offocially launched at ICE 2018, with attendees able to take part in an immersive 360 degree photographic experience that they were invited to share across social mefdia platforms.