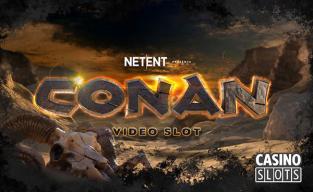 Stockholm-based NetEnt have an enviable track record in launching slot machines based on popular films, TV shows and celebrities. The company has just announced that they have secured the rights to sword and sorcery epic Conan, with a new game due to be launched later on in 2019.

It's a brand new agreement and little detail has been released yet. It follows on from successful partnership agreements that has seen games such as Guns 'n' Roses, Motorhead, Vikings, Jumanji and Planet of the Apes launched over the last few years.

Get Ready For Epic Action

Conan is a mythical hero who was first seen in a series of stories published in the early 1930's. He's gone on to star in TV shows, video games and two movies, one of which made a star of a certain Arnold Schwarzenegger.

The online casino world can now start looking forward to what is sure to be another exciting slot from NetEnt.

Conan is a character and a brand with a fantastic history and legions of fans all over the world. We are honoured to be creating our own adaptation of Conan and can’t wait to give him the hallmark NetEnt treatment