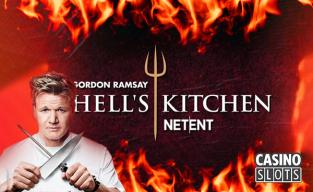 Online casino games developer NetEnt has given us a taste of a new cookery-themed slot. Gordon Ramsey's Hell's Kitchen will be launched later on in 2020, giving players plenty of time to build an appetite for this celebrity-endorsed game.

Famed for his tasty dishes as much as for his colorful language, Gordon Ramsey is one of the most famous chefs of all time. Details of the new game are sketchy, and whether NetEnt decides to edit some of Ramsey's profanities remains to be seen. But we can certainly expect a splash of humour to be among the ingredients.

Gordon Ramsey first hit the screen back in 1998 with Boiling Point, and has gone on to host massively popular shows including 24 Hours to Hell and Back, and the famous Hell's Kitchen. He's also had time to build a chain of restaurants across the UK, Europe, USA and Asia.

The launch of the Hell's Kitchen online and mobile slot will only serve to enhance his fame across the multiple casinos that use Netent games and software.

Brokered by NetEnt and Ramsey's licensing agent, Global Merchandising Services, the new deal is being enthusiastically welcomed by all parties and we are already hotly anticipating its arrival later on in the year.

“Gordon Ramsay is a true rock star of the restaurant world. His strong personality and use of colourful vocabulary as front-man of Hell’s Kitchen have earned him legend status as a multi-Michelin starred celebrity chef, with fans all over the world..''