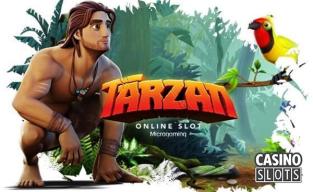 Launched in 2016, the Tarzan online and mobile slot has been a big success for game developer Microgaming. It's been announced that the company have extended their licensing agreement for the character and will add a second slot to the range.

The rights to Tarzan are owned by Edgar Rice Burroughs Inc. The extended partnership, brokered by Creative Licensing Corporation will see the original Tarzan slots game joined by a second adventure to be developed by Fortune Factory Studios. Tarzan will feature prominently in the new release, leading players to exciting features and high energy gameplay.

It's set for an exclusive preview at this months' ICE London event, in preparation for launch later on in 2020. Tarzan is one of the most popular characters, having been the subject of books, movies, TV shows, and even Broadway productions.

The new Tarzan slot is sure to continue the success of the original game at online and mobile sites that use the Microgaming range.

“Our extended deal with Microgaming will see the creation and launch of a new Tarzan game, which we are confident will build on the character’s successful first outing with the renowned supplier.''