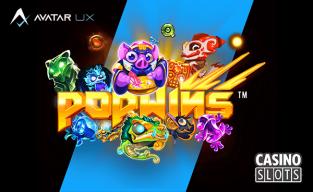 AvatarUX will expand their range of PopWins online slots with the launch of MonkeyLaundering. Based on the famous monkeys that bath in Japanese hot springs, it features the innovative feature that sees reels expand on wins. Special enhancements to the gameplay include multipliers of up to10x on the monkey symbols, and the removal of lower-paying symbols during the free games.

A cartoon style sees a variety of monkey characters across the reels. It’s a cheerful style that brings these soaking simians to PCs and mobiles at sites that carry the AvatarUX slot games range. The PopWins mechanism is a popular innovation from AvatarUX that’s featured in many of their top performing games, such as BountyPop, PiggyPop, and LolliPop.

Winning symbols ‘pop’ and two new symbols, one above the other, take their place, expanding the reels and the number of ways to win. Other symbols respin and if this improves the win, the PopWins feature repeats. Once the reels are fully expanded, players are rewarded with free spins.

MonkeyLaundering introduces some exciting new features to enhance the gameplay even further. During the free games a Scatter Collection feature upgrades monkey symbols to multiply their values by 5x or even 10x.

If all reels unlock in the free spins round, lower-paying symbols will be removed from the mix and extra spins are added to the total. It also comes with further rewards such as starting reel sizes, initial multipliers, and increasing multipliers.

Players can dip into the MonkeyLaundering online slot in the near future.