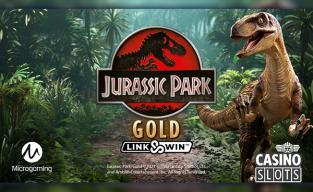 Jurassic Park: Gold is the latest movie-themed slot from Microgaming, and it hits desktop and mobile casinos on 22nd February 2022. Developed by Stormcraft Studios, in partnership with Universal Games and Digital Platforms, it sees real images of the main cast alongside Velociraptors, a T-Rex and other prehistoric creatures.

Jurassic Park: Gold is a 5-reel, 40-line game where the iconic logo is a wild symbol that has the power to act as others to complete combinations. A mosquito in amber scatter symbol unlocks free spins bonus features, with 4 different levels available once the round is triggered enough times. Players benefit from an increasing number of potential wild reels at each stage, and there’s a special T-Rex free spin where it’s possible to have all 5 reels fill with the wild symbol for a huge win.

Respins From the Reptiles

A Link&Win respins feature starts when 6 or more Powerball symbols land at once. Each holds a money value or jackpot level, and the reels respin at least 3 times, with any new Powerballs resetting the counter back to 3 games. Reels can expand to a maximum of 8 rows, giving players extra symbol positions to fill with valuable Powerballs, and if all 40 spots are filled by the end, a jackpot of 8,000x is paid.

This thrilling addition to the Microgaming range launches on 22nd February and it joins other popular games, such as Mega Moolah and Jurassic World at the best casinos.

“We’re hugely excited to have embarked on the next Jurassic Park adventure, bringing this incredible world to life for slot fans once again. Jurassic Park: Gold combines the enormity of a great global brand with the power of the popular Link&Win™ mechanic, while immersing players in amazing audio-visuals,” said Terence Igesund, Founder and Executive Producer at Stormcraft Studios. “And, back bigger than ever is the free spins selection, inviting park visitors to explore four dinosaur-themed free spins features, with the Tyrannosaurus rex rounding things off with the colossal win potential of WildStorm.”

In true Stormcraft Studios style, the team behind Jurassic Park: Gold have done an amazing job of delivering an immense blockbuster game that lives up to its namesake.