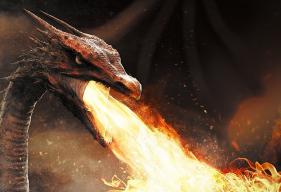 The International Casino Expo is the single most important event each year for companies and individuals in the online casino industry. Along these lines, each software company tends to have a big release set for that particular event to showcase their talents and bring attention to what they're offering players. This year, Habanero is going to be offering up a new title called Dragon's Throne at ICE.

This game is set to have five reels and three rows with a whooping 50 paylines spread across the reels. The Queen of Dragons is the bad guy in this title, and you'll get to use one of four different protagonist dragons to try to battle her and save everyone from her tyranny. It's a bit of a spin on the whole "slay the dragon and save the day" approach, and it really brings together the dragon theme since it's a key component in how the gameplay works out.

For example, during a bonus feature, the strength of your dragon will depend on wins and losses in battle, and this feature is expected to be the centerpiece of the title.

Habanero is planning a bit of a triple release in a short period of time. They've already released Bombs Away and Gold Rush, two online slots that have brought their total number of slot games to 60. They also have six table games and a total of 10 video poker variations, and this shows that they're willing to beef up their non-slot genres as bit as well. With over 75 titles available now, they're starting to get up in the range of games where they could arguably be the only software company that an operator would need to have a content deal with, provided that this fit into their business strategy.

A number of new releases saw Habanero really gain a lot of attention in 2015. They're obviously looking to continue to build on that attention in the new year, and by releasing a game that they feel will get a lot of attention at the International Casino Expo, they could really kickstart the new year in a major way. Overall, it'll be fun to sit back and watch how this game is received by both players and people in the industry.

If you want to try these new games, then we suggest you try Club Gold Casino.