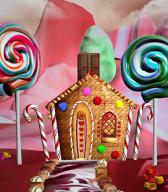 HTML5 is the platform that every software company has been gradually switching over to for the past few years now. It has some serious advantages over Adobe Flash, the previous standard for games in the mobile and instant play spaces. Magnet Gaming understands the importance of looking to the future with how they build their titles, and that's why they've used the HTML5 platform for building their newest title Candy Kingdom, a game with two different progressive jackpots.

This video slot has a number of features based on the theme of living in a kingdom made of candy. For example, you can get the Waffle Hill bonus game, the Cake Spinner feature, a Candy Mix or the Pattern Matcher to get extra payouts that add to your bottom line. What's more is that you can trigger these mini games by only getting two or more of the scatter anywhere on the reels, and they don't even have to line up from left to right. This game seems primed and ready to give players tons of candy-themed fun.

Games produced by this software developer tend to have a lot of features, and it's interesting how these features impact the volatility of the experience. The traditional line of thought is that bonus rounds increase volatility in games because they pull together a lot of value into a feature that you'll rarely see. However, in Candy Kingdom, you're going to hit features much more often, so it doesn't really affect the volatility much at all. In fact, it may actually help to lower it below the average just depending on how quickly the features come and what the payouts are like on them.

Magnet Gaming has been doing a great job since first opening their doors in 2014. They initially started with just eight online slots, all of which were based on HTML5, and they've added multiple titles since then. While they don't have the largest quantity of games out there, they definitely have it when it comes to quality, and that's what really matters the most in today's online casino environment. If they keep up the momentum that they've built by starting off 2016 with a new launch, then there's no telling how well they could do by December.