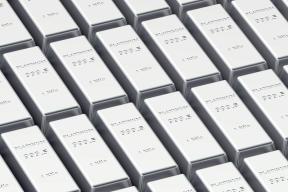 In the online gambling industry, it's rare to see a new genre of games come out and gain popularity. Over the past 18 months or so, we've been seeing more and more discussed about video scratch cards, and OMI has been one of the companies really pushing this format. The idea is that you're essentially upgrading traditional online scratch cards in some of the same ways that you would upgrade classic slots by moving forward in the video slot genre. Along these lines, they've released their newest video scratch card: Platinum Bullions.

This game offers wild symbols, multipliers that go up to 25x, the ability to play at different stakes, auto scratch options and the ability to purchase multiple tickets at once. There's also a mystery chance feature, and this gives you more opportunities to win without having to line up certain symbols on the card. This seems similar to the random jackpots that you see with games by companies like Realtime Gaming.

There are two different options for this game in terms of how the operator handles things. First is a pre-batch option, which is great for national lotteries and other similar systems where there has to be a set number of winners at different stakes for every so many cards sold. Alternatively, there is a random number generator-based version that has each individual card's winnings determined at random, and this is more common in online casinos and other online gambling establishments. This option isn't normally used in government-backed lotteries because of restrictions and laws on how the payouts have to be structured.

Looking Forward to the Future

OMI is one of the main companies right now that's looking forward to the future with video scratch cards. You don't really see many of these titles coming out from the major players in the software side of the industry, though we're sure that will change once enough momentum is built up behind them. When looking forward to the future, OMI is hoping to really capitalize as much as they can on this relatively novel genre of games, and it could be one of the keys to building up a lot of momentum during 2016 as long as they keep coming out with fresh, high-quality titles released on all channels.