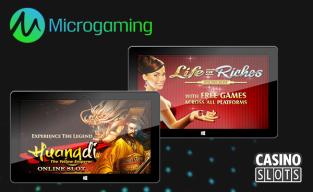 Just a couple of weeks ago, everyone was thrilled to see what the software companies in the online casino industry were coming out with for the holidays. Now that we're past that, Microgaming is kicking off the new year with a pair of new slots. This goes to show that they're looking to lead the way into 2017, and they definitely have the strength to do that with their history.

The first new release is Huangdi the Yellow Emperor, and it's based on a Chinese theme. You'll find many different instruments on the reels with great graphics overall. High-quality calligraphy is shown on the reels, and a lot of effort was put into the appearance of this game in order to give players something that they can really relax and enjoy. The gameplay happens across five reels, three rows and 25 paylines, so you'll have plenty of ways to win without feeling overwhelming by having too much going on with each spin.

The Life of Riches online slot is the second of the two new Microgaming games, and it uses 30 paylines across five reels and three rows. There are a lot of multipliers in this game, including a 2x multiplier during free spins that compounds with a 2x multiplier you can get from stacked wild symbols inside of that feature. There are some pretty significant wins available in this game, and it definitely has a higher volatility than most, which makes sense considering the wealth-based theme. You could begin your own life of riches if you hit the right winning combinations in this game.

We're unsure what to expect from Microgaming in 2017. A lot of figures in the online gambling industry felt like they were shown up quite a bit by other companies like Net Entertainment in 2016, and we expect that this will kick them into overdrive on the back of a competitive streak that we've seen in them before. Two new titles is a good way to start off the year in an effort to build some momentum, but they're going to need something big up their sleeves if they want to avoid being edged out of the spotlight this year.