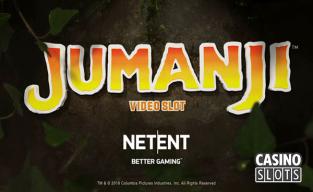 Net Entertainment has a habit of debuting big, branded online slots at the International Casino Expo each year, and it's coming up on February 6, 2018. Along these lines, lots of people were wondering what their big announcement would be, but the cat's out of the bag. This is going to be when they formally debut their upcoming Jumanji video slot, which will be based on the recent film by the same name.

If NetEnt's previous big branded names, like the NetEnt Rocks! series or the Planet of the Apes slot, are any indication, then there are certain things that you'll be able to expect. First is a tremendous emphasis on great graphics and a strong visual appeal that sets up the mood and overall tone of the experience. Second is a big focus on features that make sense within the context of the movie and its plot and characters. Finally, we may also end up seeing them play with the traditional formats a bit, which is something they've also done for big branded games in the past.

The Story of Jumanji

The Jumanji story originated in a children's book, and there was a film based on that book that came out in the mid-1990s featuring Robin Williams. The newest film has only made its debut in the past few weeks, and it's been exceptionally popular. Now players will have a chance to get into the mix themselves with the upcoming slot by the same name, and we're sure that it's going to be quite the experience if past titles by this company are any indication.

No one has ever accused NetEnt of resting on their laurels, and that's definitely the case with how they are starting off the new year with a major announcement like this one. They keep building and maintaining momentum in a way that allows them to stay at the forefront of what most people are thinking in the slot industry, and that's how they have dominated the landscape for years. This new announcement of the upcoming Jumanji slot, which is supposed to be released later this year, is the perfect way to keep that going.