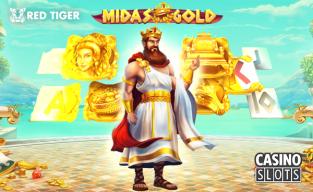 The story of King Midas and his ability to turn anything he touches into gold has been told in a lot of different ways, but Red Tiger Gaming has decided to tell it in the form of a video slot by the name of Midas Gold. This is their first release of 2018, and it will be available for real money play on January 29, 2018.

The first thing you notice when you're first presented with any slot for the first time is how it looks, and that's a natural part of being human. The first impression you get from a game is pretty important, and Midas Gold will give you a solid one. There are a variety of symbols with the motif of the story this game is based on, and it even includes the king's daughter, who he mistakenly turns into gold in the story in a morbid twist, effectively killing her.

There are five reels, three rows and 243 ways to win in this game. The main feature activates to have King Midas himself reach up to touch a symbol. All of that symbol will turn to gold on the reels and hold still while giving you what amounts to a free respin feature. The hit-rate in this game is fairly high as well, and even the hit-rate of the features comes pretty often, relative to other games. If you're a fan of titles that give you a whole lot of action, then this is the type of game that you will most likely enjoy quite a bit.

Red Tiger Gaming has started off this year on the right foot with a new release right out of the gate that's built up quite a bit of buzz in the industry. Players are waiting to check out what this title has to offer in terms of the overall experience, and they are not going to be disappointed. This is a software company that built up a whole lot of momentum in 2017, and they have definitely fed off of that by starting out in the new year with a big new release.