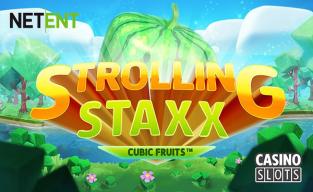 Following the huge success of the Neon Staxx and Butterfly Staxx slot machines, Swedish games developer NetEnt has now launched the third game in the series. Strolling Staxx sees cube-shaped fruit symbols over 5 reels and 10 paylines. With stacked symbols triggering free repsins and colossal symbols, this game squeezes every last bit of fun from the fruits.

Look Out For Juicy Wins

Strolling Staxx is a cartoon style game, where colourful animated symbols spin against a backdrop of cube-shaped trees and a flowing river. The game pays out when you land these strange cherries, plums, strawberries, lemons and other fruit symbols across 3 or more reels on a payline from the left side. A golden wild symbol helps out as it acts as others.

What players really want to look out for though, are the stacked symbols that can fill a whole reel at a time. When this happens, the stack moves one reel to the left per spin, with other reels respinning for free until it moves out of view. If another stack of symbols appears, this Strolling Staxx Respins feature carries on until all the stacks have gone.

Giant Symbols For The Biggest Wins

That's not the only bonus feature though. Any symbol can randomly appear as a Colossal symbol, filling a 2x2 or 3x3 grid on the reels. It makes it much easier to form winning combinations and these over-sized fruits can be seen in the base spins, as well as during the Strolling Staxx Respins.

Play For An Extra Chance Feature

Strolling Staxx can be played on desktop PC's and mobile devices from just 0.10 per spin. Players can activate a Bonus Bet for an extra 5 credits, which will activate an Extra Chance. This guarantees 3x3 Colossal symbols on the reels during the Strolling Staxx Respins.

Players will now find this exciting twist on classic fruit machines at online casinos that carry the NetEnt games range.

With its bright and playful fruity cubes, Strolling Staxx is here to inject a blast of colour into the middle of winter. Boxes of fun await in the latest NetEnt adventure especially for our huge recreational player base.