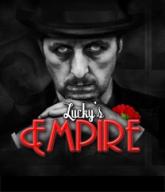 GW Games Studio has released a new online slot to several William Hill channels. The Lucky's Empire online slot will be released according to what William Hill is calling their "omni-channel strategy," and this means it will be released on mobile, web-based and retail location platforms all at the same time. Because they own so many land-based shops, they have the ability to get a land-based reach that the vast majority of other operators can't compete with, and that's one of their key long-term advantages.

Lucky's Empire is a 20-payline slot with five reels and three formats. While the layout might be typical, the gameplay is anything but. This game is based around Prohibition in the United States during the 1920s, and it follows Lucky's bootlegging operation. You'll have a lot of chances to get some sizable payouts in this game, and part of it is the story of a thief who has stolen some of Lucky's stash of liquor. The bonus features, graphics and everything else about this game fits this theme in an excellent way.

You'll find multiple bonus features in this new game. With the Lock N Load feature, you'll have winning symbols lock together with reels that spin for what amounts to a sort of re-spin feature to give you extra wins each time your payouts improve. With the Mugshot Mayhem bonus, you can pick up six or more of the newspaper scatter to search through warrants and find big payouts. The Stash Search bonus is one of the main story-driven bonus features, and it involves searching in different places for Lucky's stash. Finally there's Lucky's Bonus. If you find Lucky's stash in the Stash Search Bonus, then you get to go to Lucky's office and pick a prize from a number of briefcases.

William Hill has been one of the biggest names in the online gambling scene for quite a while in the United Kingdom, and the way they have tied their games into their land-based betting shops is something that we haven't really seen on the same level from any other countries anywhere in the world. This is a strategy that seems to be working very well for them, and it's pretty cool that people can play the newest releases like Lucky's Empire in those shops as well.