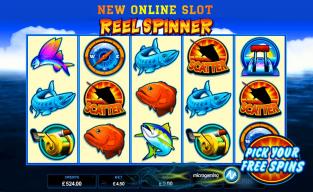 Microgaming has been producing online slots for over 20 years, and their most recent release is timed perfectly for people who want to vacation or enjoy the outdoors during the summer months. Reel Spinner is a video slot based on a fishing theme, and you can see that the word reel in the title can refer to the rod and reel you use to fish or the reels on the slot itself.

This online slot uses a 15-payline format, which is something that we don't see that often from Microgaming these days. They tend to prefer more paylines or the "all ways" format instead, but it's cool to see them mixing it up. This game has five reels and three rows, as you would expect, but it also has a lot more to offer than its somewhat typical format would suggest. The soundtrack is great for relaxing and enjoying the fishing action, and you could reel in a major win if you hit the water at the right spot.

Pick up three or more of the scatter symbol in this game to be taken to a two-part bonus feature. To start with, you'll pick a boat that you'll use to go fishing, and that will tell you the number of free spins you get. You can earn a maximum of 20 in this feature. Additionally, you'll then spin your fishing reel to see how big of a multiplier you get on your free spin wins, and the multipliers go as high as 5x.

Something else that's pretty cool about this slot is that it has an achievements system built right in. That gives it a tremendous amount of extra replay value that you don't always see from video slots, and that's really cool because it shows that Microgaming is expanding and trying different things than they normally would. Achievements like this have been used in video games and casual games for a long time, and for them to make their way to video slots signals that there's more crossover in the genres than a lot of people would have expected.

Reel Spinners is slated to be released on July 6, 2016. It will be released for desktop and mobile players via the Microgaming Viper and Quickfire platforms all at the same time as well, so everyone will have a fair chance to get out on the water to try to reel in some major payouts.