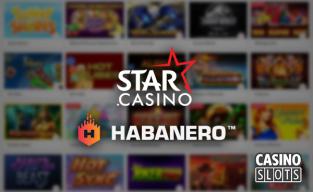 Distribution is one of the most important things for an online casino software developer. You can have excellent games that players would love, but if those players never actually end up seeing the games, then it doesn't really mean anything. This is why the deal between Habanero Systems and Star Casino is important because it allows Habanero's games to be in front of even more people at one of the top operators in Europe.

Games Included in This Agreement

As a part of this agreement, Habanero's full selection of 75 video slots will be added to the lineup at Star Casino. This includes dozens of games that have gotten awesome receptions like fire Rooster, Bird of Thunder and Panda Panda, all of which are some of their latest releases. They also have older titles that keep getting attention from players as well because all of their games have been produced from the perspective that they want them to be relevant for years to come.

Once again, this deal puts Habanero in direct, head-to-head competition against some of the biggest names in the world like Net Entertainment and Microgaming. While this type of competition is very good for them since they get to show that they can hang with the bigger names, it's also a great deal for the players since it puts them in a position to have a larger selection of great games to pick from all in one place. It's hard to argue with that, and it's definitely the players who are winning the most as a result of this deal.

Another important aspect of this whole situation is that all of Habanero's games are produced in HTML5. This means that they're all available via mobile, so Star Casino's mobile offering just got a huge boost as well. Mobile is still the fastest-growing segment of the online gambling world, and there are many demographics that play more via mobile than from more traditional avenues. This will only continue to be the case more and more, so getting ahead of the curve with as much high-quality mobile content is definitely going to help this operator in the long run. Overall, it's easy to see that everyone involved will benefit from this arrangement.