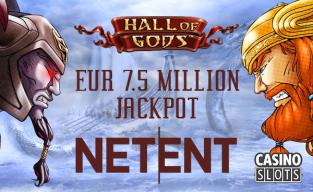 The biggest progressive jackpots in the world pay out seven- and eight-figure wins that completely change the lives of the players who hit them. That's precisely what happened recently when a lucky player from Norway was able to take down the progressive jackpot on the Hall of Gods slot by Net Entertainment. This prize was worth around EUR 7.5 million.

How the Big Win Happened

The total win was worth EUR 7,525,932.97, and it came to a 47-year-old player from Norway. He was playing on Folkeautomaten, a Norwegian brand operated by the same company as the more well-known ComeOn! brand. With this win, Hall of Gods has paid out nearly EUR 80 million, making it one of the biggest progressive jackpot games ever released online in terms of the total jackpot wins produced. This isn't all that surprising, however, because Net Entertainment's progressives have paid out more than EUR 54 million in the past 12 months.

A number of other progressive jackpot games are provided by Net Entertainment. The most popular is Mega Fortune, a jackpot that has previously held the world record for the largest online jackpot ever. Arabian Nights is another game that has a big progressive, but the biggest they have ever paid was EUR 17.86 million on Mega Fortune back in the first quarter of 2013. It's clear that they are in the business of making millionaires, and they have definitely made a lot of them with their huge progressive jackpots over the years.

Anyone who is familiar with the online slots industry can tell you that Net Entertainment has made a ton of progress over the past several years, and they have come out on top as one of the best, if not the best, developer of online slots in the world. Many people wondered if they could keep their momentum going in 2017, and it appears that they have. They have announced VR slots coming later this year or early 2018, and they have regular new releases that keep players engaged with strong visual and gameplay values, a combination that is definitely a winner for them.