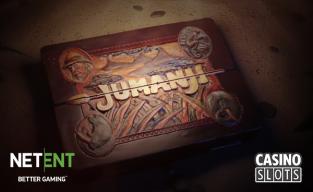 The original Jumanji movie was released in 1995 and starred Robin Williams as Alan Parrish, who has been lost within a magical board game for decades. Online casino games developer NetEnt has released a new slot machine that will take players back to the world of Jumanji, with a range of bonus features themed around the film and a special board game round that can bring in some magical rewards.

Jumanji is a unique combination of board game and slot machine. It comes with 5 reels, 36 paylines and is compatible with desktop and mobile platforms. The reels are in a diamond pattern, with just 3 symbol on the outer ones, 4 on the next ones in and 5 symbols on the middle reel, all surrounded by the path of the Jumanji board game. Lower-value playing card symbols are joined on the reels by higher-paying pictures of a rhino, pelican, lion and crocodile. The golden wild symbol is able to replace others to complete combinations and the Jumanji box is a scatter symbol.

There's 4 randomly-triggered events that can take place in any spin, each one directly related to scenes from the film. A Wild Stampede sees rampaging rhinos adding between 4 and 9 extra wild symbols to the reels, while in the Monkey Mayhem feature, the symbols get re-arranged after a spin to guarantee a win. In the Sticky Vines feature, all wild symbols and all symbols that were part of a win, will stay in place as the rest of the reels respin for free, and Monsoon Vines cause whole reels to fill with wild symbols which stick around as the remaining reels spin again.

Landing any 3 or more scatter symbols takes players to the Jumanji game, where they get to roll dice and move a token around the board. The number of moves depends on how many scatters triggered the feature, with up to 8 rolls of the dice awarded. Players can land on a selection of bonus rounds, including 4 free spins features, each with one of the random in-game features in effect.

Extra rolls of the dice are awarded if players land on a free spins round twice, plus there's Mystery awards which can include instant wins, even more rolls, or more free spins.

It's A Jungle Out There

This visually impressive slot will surely appeal to fans of the film, who will also enjoy the wide choice of extra features. It comes with a wide bet range and a high return to player percentage. Jumanji is available now at NetEnt casinos worldwide.