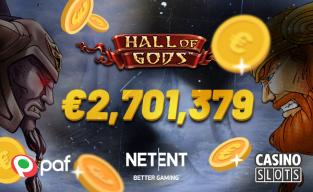 For the eighth time this year, NetEnt slot games have paid out jackpots of over €1 million. The latest win was for €2,701,379, scooped by a lucky player from Finland as they spun the reels of the Hall of Gods game.

The player, who has opted not be identified, had a €2 stake on the mobile version of the game at Paf.com. On top of this huge jackpot prize, they also collect €350,000 as part of the NetEnt Mega Million campaign, which awards an extra prize to anyone winning the Hall of Gods or Mega Fortune jackpots. This same promotion also gives players the chance to claim €3,800 during the Soccer World Cup tournament.

This latest jackpot win comes hot on the heels of the €1.4 million prize won on Arabian Nights and the €4.25 million jackpot won on Mega Fortune Dreams.

We have another example here of how NetEnt’s games can change people’s lives, and the Mega Million campaign will give us even more chances to do just that.