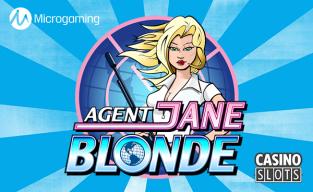 Jane Blonde Returns is a new slot developed for Microgaming by Stormcraft Studios. It was previewed at IGB Live! in Amsterdam on 19th July and is due for general release in the near future. Launched back in 2005, the original Jane Blonde slot has been a big success and this update sees the female super-spy back in action.

The new game features stunning graphics that replace the cartoon style of the older version. It's a 5-reel, 15-payline slot that rewards players with stacked wild symbols and a respins feature, bringing the action to desktop PC's and mobile devices.

This is the second game from Stormcraft Studios, an independent developer whose Fortunium game is already proving to be a big hit. Stormcraft games are provided exclusively to Microgaming casinos. In celebration of this new release, the Microgaming stand at IGB Live! was given a spy-themed makeover, giving attendees a chance for a sneak peek at what Jane Blonde Returns will offer.

With stunning graphics and an atmospheric soundtrack that brings you into Agent Jane Blonde’s world of action and espionage, it’s sure to be a hit with both fans of the original and new players when it goes live