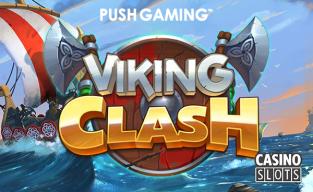 Viking Clash is a slot from Push Gaming that features cartoon Norse warriors crossing the seas and encountering catapults and giant waves along the way. It's a dual-reel game, with five reels and 25 paylines on each set and it comes with plenty of bonus features including locking wild symbols, free spins and a unique battle bonus with multiplier awards.

The cartoon style symbols inlcude runestones, axes, hammers and Viking characters. Wins can occur on both sets of reels, but players can see extra wild ships added to each set when a huge wave washes over the game. These ships then sail across the reels, completing winning combinations with other symbols staying locked in place until they sail off to the left of the screen.

Any three or more scatter symbols across the reels will trigger six free spins. During this Viking Battle feature, the initial scatter symbols catapult wild Golden Shields on to the other set of reels and these stay fixed in place until the round is over. If any more scatter symbols appear, they fire more wilds across the game, while also addiing one extra free spin to the feature. Should one of these wilds land on a wild that's already on the reels, it gets upgraded to a multiplier symbol and there's no limit to how many extra spins and multipliers can be added.

Viking Clash is due to set sail at online casinos from 21st August, 2018. It's mobile optimised to play across all devices and comes with a high return to player percentage of 96.667%. Playable from 0.25 per spin to a maximum of 100.00, the highest possible win is equal to 13,200 times the stake.