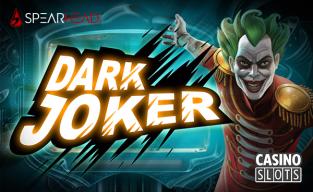 The latest slot from Spearhead Studios features a crazy character across 3 reels and 5 lines. Dark Joker takes players to a world of heroes and villains, where they could win up to 1,000x their stakes.

The main character has a mad smile on his pasty-white face, and flowing green hair. The game sits within a steampunk environment, where cherries, lemons, watermelons and red 7s appear alongside the Dark Joker. In the base games, he awards a mystery prize on each winning payline he lands on, worth up to 7,000 coins.

It comes with a Crazy Joker mode, where extra Jokers appear. There's also a respins feature, triggered by stacked symbols on 2 reels in a non-winning spin. These lock in place as the other reel respins. If all 3 reels show the same stacked symbol, it activates a Win Multiplier Wheel that can boost prizes by 10x over.

Dark Joker is one of 5 new games from Spearhead Studios in what they are calling Super July.

We are quickly building a strong portfolio of entertaining titles. Dark Joker it’s a great fast-paced game with higher winning potential than your average Joker game.”