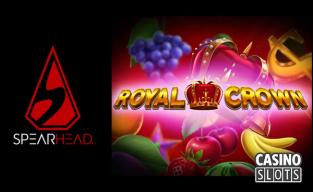 Spearhead Studios continue their Super July run of game releases with Royal Crown. It follows hot on the heels of Dark Joker, and features classic fruit-themed symbols over 5 reels and 10 lines.

Available to play across desktop and mobile platforms, Royal Crown is a colourful game with high-end graphics. The traditional cherries, plums, lemons, and watermelons all have a slight 3D effect to make them stand out. Players need to land at least 3 of a kind across a line from the left to win a prize. A red 7 pays the top prizes, with 500x to collect when it fills a payline.

The crown is a special wild symbol. It not only acts as others if it's then possible to complete a combination, but also expands across any reel it lands on. Players could see as many as 3 expanded wild crowns on the middle reels at once, leading to guaranteed wins.

Royal Crown also features 2 scatter symbols. The $ pays for 3, 4, or 5 in any positions, while the star only pays out when it lands in 3 places at once.

Aimed at the German and Eastern European markets, Royal Crown is an example of how Spearhead Studios develops specific games for different regions. It joins hits such as Meganova and Book of Souls in their range.

This is a well-known and loved type of game in the German and Eastern European markets. We have launched several titles for these markets and Royal Crown is a very nice addition. All these slots are performing really well.''