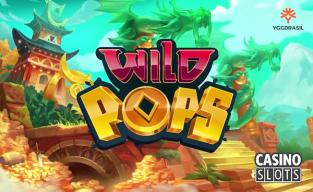 The WildPops slot is the second from Yggdrasil and AvatarUX to feature the PopWins mechanism. It adds 2 symbols to every winning symbol position, giving players more and more ways to win. WildPops features cartoon symbols inspired by Asian culture.

Players can unlock re-spins with extra lives and rising multipliers when they land several wins in a row from the PopWins system.

This is a 5-reel game with the colorful creatures and card symbols arranged over 3 rows. A decorative pole to the left of the reels counts the number of wins in a sequence, while another to the right reveals how many ways to win are active.

Winning symbols 'pop' and 2 new ones fill each single symbol position. This expands the reels and the number of ways to win, making it easier to see another winning sequence, and further pops. Random wilds appear after the 3rd pop in a series, and if players create enough wins in a sequence, and expand the game to 7 rows high, they unlock special bonus rounds.

Three extra lives are awarded, so instead of going back to 3 rows at the end of a series of pops, the reels stay expanded, using up one of the lives. Any further pops also increase a win multiplier by 1x for some potentially huge prizes.

Play Online Or On Mobiles

This high volatiltiy game is compatible with desktops and mobile devices. Players can spin the reels for between 0.20 and 50.00, and it comes with an average payback percentage of 96.8%.

“Our latest PopWins™ game contains all the thrilling excitement of our feature mechanic with a fun theme and massive win potential. Any spin can get the Popping started and give players thrilling experiences.''