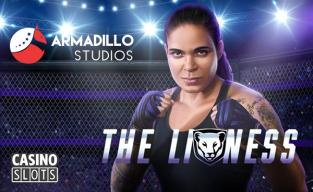 The Lioness With Amanda Nunes is the first branded online slot from Armadillo Studios. It’s themed around the famous Brazilian MMA fighter and the timing of this release on 2nd August coincides with her bout against Julianna Peña on July 30 in Dallas on 30th July.

Amanda “The Lioness” Nunes is one of the best ground wrestlers in MMA and this new slot machine captures the excitement of her career with Fight Feature multipliers, respins, and free games.

If you enjoy MMA-themed games, then the Lioness With Amanda Nunes is one you won’t want to miss. Playing card emblems, gloves, punchbags, and several images of Amanda Nunes appear on the 6 reels and 40 paylines.

Nunes symbols can trigger an exciting Fight feature, where she awards win multipliers of 2x to 7x. The Lioness Link Bonus is a respins feature with 3 initial spins with only scatters worth up to 10x, jackpot symbols, or blanks on the reels. More scatters reset the counter, and players win the accumulated scatter values and jackpots at the end.

A free spins feature sees extra stacked Amanda Nunes symbols on the reels, making it easier to trigger the Fight feature. The accumulated multipliers persist for the rest of the round, helping players to the biggest wins as they deliver a knockout blow to the casinos.

The Lioness With Amanda Nunes join Armadillo Studios games such as 15 Armadillos and the Queen of Egypt Exotic Wilds slot machine in their expanding range.

David Stoveld, COO of Armadillo Studios, says: “As we make strides in our U.S. market expansion, we realize the importance of branded content. We are thrilled to finally be ready to release a slot centred around a true, one-of-a-kind MMA icon. The Lioness slot has really come together, and we are proud of the final game product as well as the opportunity to work alongside the legendary Amanda Nunes.”