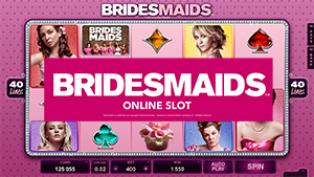 Crossover titles in the online slots industry are nothing new. Many online casino software developers have put together titles based on television shows, video games, books, movies and other forms of media for a couple of decades. What makes these games stand apart is when the software developer pulls the themes of that particular brand in a way that makes the features, graphics and gameplay of the new title really fit in with the feel of the brand itself. This is what we expect to see with the new Bridesmaids title by Microgaming.

About the Bridesmaids Movie

Back in 2011, the Bridesmaids film was first released. It's a romantic comedy that centers around the main character Annie and how she's been asked to be the maid of honor in a wedding for her best friend. Annie ends up having a number of misadventures as the wedding gets closer and closer, and she has the rest of the bridesmaids to back her up. It's a funny movie that puts a different spin on the "chick flick" trope that you normally see.

Slots Made From Films

Online slots that are made from movies are often given a bad rap because some software providers in the past have tried to just coast on the popularity that a big name will give them. This has led to many titles with solid themes and substandard gameplay, and that's where this negative reputation comes from. This isn't something you have to worry about with Microgaming, however, because they focus extra-hard on their movie titles to make sure that this type of mishap doesn't occur on their watch.

Microgaming has been around since the mid-1990s, and they're known for being one of the two largest online casino software providers in the world. They've maintained this position for about two decades, and they've been able to do so by continuously pushing for stronger innovation, newer titles and better-looking games. Bridesmaids is going to be their biggest release for the month of August, and players have been looking forward to it since it was first announced months ago. It's no doubt that this is going to be one of the most popular games of the year, and that's why everyone is so excited about its release.