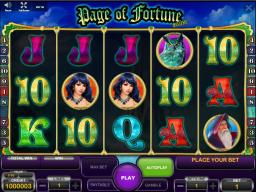 One of the things about online slots these days is that the themes themselves are often fairly shallow. There's a ton of room out there for games that develop a serious world for players to enjoy, and Zeus Gaming has done that with their new Page of Fortune Deluxe online slot. With this new title, you're going to have an in-depth, medieval fantasy world that features mages, magic and the typical swords and sorcery that comes along with the genre.

What Page of Fortune Deluxe Offers

An in-depth game world with its own mythology is at the core of this title as the lovely Baroness Elspeth and the powerful Mage Dariendalf come together to lead the way to some big payouts. The game is laid across a large, spacious background, and when you add the symbol set that includes spell books, characters, magic owls and more, you get a great overall feel that pulls you into the game. Free spins are also available in this title, and you'll also get a chance to pick up huge multi-line pays with expanding high symbols.

Over the past 18-24 months, we've seen the beginning of a big shift in the online slots world. Instead of just throwing together graphics that make sense for a theme and banking everything on the bonus features (which are often similar from one game to the next), a big focus started to be had on the quality of the actual games.

Zeus Gaming has shown that they're a big fan of high-quality graphics with the overwhelming visual appeal that you see from Page of Fortune Deluxe. What's interesting to note is that they're not going the 3D route, the standard route that many software companies are taking their games. Instead, they're simply offering high-quality 2D and 2.5D graphics laid across a wonderfully-rendered background.

Future of the Brand

Zeus Gaming has started making some moves. They recently signed a deal with BetConstruct that will have them partnering together for their content, and when you take into consideration that this deal came not long before their newest release, it looks like they're building up some serious momentum. We hope that this momentum continues for them because they have shown some major signs of being a great source of high-quality titles for players in the future.