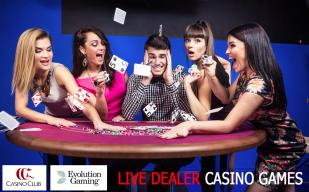 In a move that will open up new possibilities for both brands, CasinoClub and Evolution Gaming have come to a deal that will see the latter's live games available at the former. This marks the first time that CasinoClub has offered live dealer titles in its 15-year history, and that's an exciting development for one of the older brands in the industry as a whole.

How These Live Dealer Games Work

The way the games from Evolution Gaming work is fairly simple. Players are able to interact with and place bets on what's happening on a live dealer table, and the action unfolds on that table in real time. High-definition audio and video feeds are responsible for making sure players can see the action bright and clear, and it's a great example of using modern technology to give players the best of both worlds when it comes to the online casino and live dealer experiences.

The live games that will be offered at CasinoClub thanks to this deal include casino hold'em, blackjack, French roulette and Baccarat squeeze. The squeeze version of Baccarat plays very similarly to the original, but it eliminates the 5 percent commission on banker wins to simplify the payouts to be even money, just like the bets on the player win, and that avoids situations where the monetary denominations aren't broken down enough to give players an even 5 percent commission. The other games have traditional rules, and it's just like playing in a live casino since you can chat with the other players and your dealer at the table.

The Future of the Brand

What's interesting about this move is that GVC, the company that owns and operates CasinoClub, has used Evolution Gaming-powered live dealer games on a number of their other properties for years. This includes Sportingbet, Gioco Digitale and bwin. This just adds more to one of the main brands for GVC, and it shows that they aren't resting on their laurels when it comes to giving players a great selection of games to choose from. They may be one of the largest online gambling companies in the world, but it's clear that they're pushing hard to get even bigger and even better.