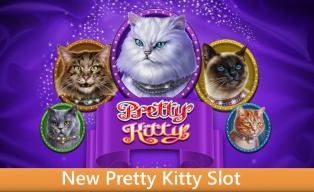 One of the great things about Microgaming is that they come out with new games on a very regular basis, and their pure volume of games has been one of the main reasons they've remained a market leader with more than 20 years of experience in the game. Their newest title shows that they know how to use just about any kind of theme to produce a title that will get plenty of interest from players with their new Pretty Kitty online slot.

This isn't the first, second or 20th time that Microgaming has produced a title based on animals, and it's not even the first or second time they've build a game around a cat-based theme. To stand out when using this type of theme repeatedly, they have to show what they're capable of doing in the gameplay arena, and they've used a five-reel, three-row layout with 243 ways to win as the basis for doing so.

In terms of features, the gameplay is largely driven by expanding symbols, even in the regular game. However, there's also a free spins bonus feature triggered by the normal three or more scatter symbols. During these free spins, you'll get expanding wilds as well as expanding high symbols, and that adds a tremendous amount of value to those spins. You'll get 15 free spins at a time, but they can be re-triggered, and it's a great opportunity to run up several big winnings all at once.

One of the things Microgaming is really pushing with Pretty Kitty is the achievements engine. This allows players to get a more in-depth experience by trying to hit certain milestones or winning combinations, and it creates competitive and promotional incentives to try to get as many achievements within the game as possible. This has been used in the video game industry, in both serious and casual titles, for quite a while, and it's great to see that they're harnessing the concept in this game. The bottom line is that this might be another cat-based game from Microgaming, but they've definitely added enough for players to want to take a look.