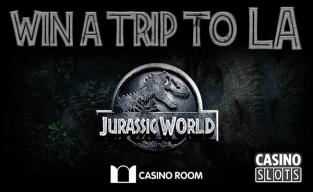 Players have an opportunity right now to win big in a promotion that started just a few days ago on June 21, 2017. At CasinoRoom, players will be able to pick up cash prizes ranging from €100 to €1,000 along with a trip to Los Angeles, California, that is worth €7,500. This is a pretty big promotion, and it's easy to get in on the action for chances to win.

How to Enter This Promotion

If you're ready to get in on the action with this promotion, all you have to do is play the Jurassic World slot by Microgaming. For every €25 total that you wager on this slot, you'll pick up a ticket to the raffle for the prizes. You can earn as many tickets as you want, and then you will have a chance to win a number of huge prizes. On top of that, there are ten different prizes worth €10 each that will be given away randomly from June 22 through July 5 for all players who make any real money wager on this game.

Details on the Prizes

The Jurassic World slot at CasinoRoom is produced by Microgaming, and it is the sequel to the Jurassic Park game that they made years ago. They are both feature-rich titles that tie in with the movies by the same name, and they have earned a ton of popularity because of the combination of great graphics, awesome features and exciting gameplay. This is a title that tons of players are checking out right now, and this promotion is a good opportunity to get paid for playing something you would be interested in anyway.