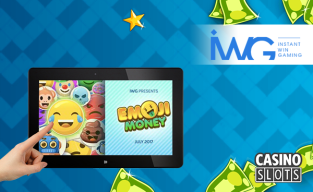 In an industry where online slots tend to get most of the fanfare, IWG has released an instant win game that is worthy of quite a bit of attention on its own. This new game is called Emoji Money, and it's based on a theme that the majority of people can relate to. Emojis are the small, graphical smiley faces and other icons that people send back and forth during digital communication like instant messaging and text/SMS messaging, and that makes it a particularly strong theme to use in this game becaue so many people are already familiar with it.

A critical piece of information about this game that should not be overlooked is that it was designed primarily for mobile. This is important for a couple of major reasons. First, mobile is the environment that makes the most sense for an emoji-based game for obvious reasons. Second, the focus on mobile shows that the instant win and lottery market is headed in a mobile direction, just like virtually every other sector of the online gambling world.

Something else that has to do with this release is that there's a film coming out this summer called The Emoji Movie. While we aren't sure what there is to be excited about when it comes to a movie that's all about these little icons, we're sure that they will get some degree of extra popularity with this game just based on the fact that the movie is coming out in the same frame of time as the game itself.

IWG has been in operation for over a decade and a half, and they produce instant win games for lotteries. They have hundreds of titles, and they were recently included as one of the nominees for the Online Lottery Supplier of the Year award at the 2017 EGR B2Bs, one of the most important (if not the single most important) award that an online lottery supplier could be nominated for. They obviously have a lot to offer players with games like this one, and the timing of the release with the movie coming out this summer could prove to be particularly interesting.