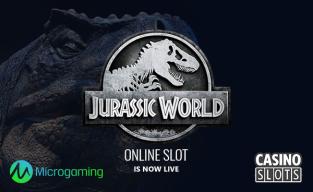 Microgaming's Jurassic Park slot was a great release from back in 2014 that got a ton of attention for being one of the best online slots ever released based on a movie. They have followed that up with Jurassic World, a slot based on the 2015 movie that was a sequel to the original. It followed a group of characters through a new type of park where things get even crazier.

This slot uses the 243-ways format with five reels and three rows. This is a very appropriate layout to use considering how much action it tends to yield for players. Just like in the movie, the Indominus Rex can appear at random, but it's not scary when he does in the game. Instead, he instantly gives you a payout that's worth as much as 1,000 times your total bet size, so it's obvious that you'll want to see this guy around as much as possible.

You'll get three different places in the park that you can take your free spins feature. You can play in the Gyrosphere Valley with increasing multipliers, or you can go to the Creation Lab with rolling reels and Cryo Wilds. Finally, you have the Raptor Den option, which comes with Held Wild Scatters. These three options cover a variety of ways to play, and they are picked at random the first 15 times you trigger the feature. However, after that, you are given a reward with the ability to choose from the three that you want to play.

The release of this game is a pretty big deal, and it goes to show that Microgaming isn't losing as much ground in the online slot arena as a lot of people seem to think. They've done an excellent job with this slot, and it's certain to be one of the biggest game releases of the year. It's packed with features, action and ways to win, and it's looking like it could very quickly become a hot new favorite among online slot fans.