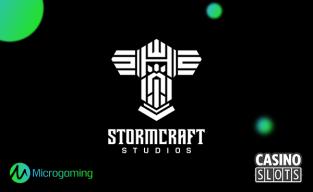 Stormcraft Studios is a brand new casino games developer that has been introduced by Microgaming and will supply exclusive content to the many online and mobile casinos that use software from this gaming giant.

A Warm Welcome To Stormcraft Studios

Many of the talented employees of Stormcraft Studios have worked on popular slot games such as Mega Moolah and Immortal Romance, bringing their years of expereince to this new operation.

Fortunium is a Steampunk themed slot that's fully optimised to play across mobile devices in landscape mode. A 5x5 reel layout has 40 lines crossing the game and offers features such as Mystery Symbols, wilds and free spins with the chance for fully wild reels. An optional Win Booster ensures that only higher-value symbols are transformed in the Mystery Symbols feature.

This exciting new game is just the start of the journey for Stormcraft Studios and their exclusive partnership with Microgaming.

Entertainment and craftsmanship are at the core of everything we do at Stormcraft Studios. The careful consideration we give the user experience will be unmistakable in all the upcoming games that we are developing exclusively for Microgaming