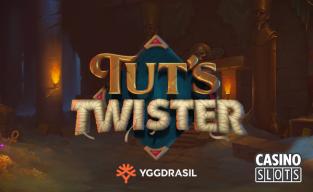 Yggdrasil have released their Tut's Twister video slot, which sets the reels in an ancient Egyptian tomb. Deep in this mysterious place, King Tut is able to trigger rewarding features such as wild reels, walking wilds, multipliers and free games.

Enter The Tomb Of King Tut

This 5-reel, 25-line slot is playable across all devices and sees King Tut rising from his tomb to create whirlwinds of symbols. Lower value winnings come from the playing card suits and greater rewards are claimed when rings, scrolls, birds and pots of gold appear. The face of King Tut, with glowing demonic eyes, is a wild symbol and he launches the main feature whenever at least two wilds are seen at once.

A Sandstorm Of Extras

Tut will randomly select one of the wilds on the reels and in the Twister feature, he turns it into a sandstorm that fills the reel with wilds. Respins then play out as more wilds are drawn into the twister until all on the screen have been consumed. If more wilds appear, these will also be dragged across the reels in respins until no more are seen. Finally, all the collected wilds are unleashed back on to the reels for some potentially huge rewards. Multipliers are added to wins and with more wild symbols, these will get higher and higher.

A series of hieroglyphics are seen above each reel and any wilds that appear will also randomly change into an Egyptian picture symbol. If enough are collected, Tut will turn the reel into another column of twisting wilds and hieroglyphics will land across the reels for even more wild symbols in the Twister feature.

With King Tut awarding so many features, this unique slot from Yggdrasil will appeal to the many casino players who love games based on the popular topic. Walking wilds that combinie with multipliers will give them increasing wins when they hit a lucky streak.

Tut's Twister has been developed in HTML5 and plays seamlessly across desktop and mobile platforms. It also comes with the BRAG feature that lets players show how they have done across social media.