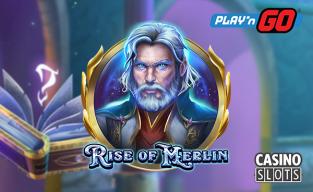 The Rise of Merlin is the first slot from Play'n GO to be based on Arthurian legend. The famous wizard stars in his own game, performing the magic trick of turning an orb into both a wild and scatter symbol. Play'n GO have shown Merlin as a younger wizard, still learning his craft, rather than the wise old magician that people often see him as.

Rise of Merlin is a 5-reel 10-payline game that places the reels within a room in Camelot Castle. Dragons. Archemidies the Owl and Merlin himself are joined on the reels by playing card icons. The character symbols become animated when players land 2 or more across a payline for a win, with dragons roaring and magic lightning surrounds Merlin.

A crystal ball doubles up as both wild and scatter symbol. Along with Merlin, it's also the highest-paying symbol of the game, returning prizes of 5000x the line stake when landing across all 5 reels.

When the orb appears in any 3 or more places at once, without crossing a payline, it triggers a special free spin bonus round. Before each free game, a symbol is picked at random and will expand across whole reels to help create extra winning lines for players.

If the free spins get retriggered before they come to an end, more symbols will expand, with a maximum of 9 being selected in each spin.

The game also sees the popular Gamble feature making a return to Play'n GO slots. Wins can be doubled or quadrupled if players correctly pick the colour or suit of a face-down playing card.

Rise of Merlin is a high-volatility slot that can be played on desktop and mobile platforms for stakes between 0.10 and 100.00 per spin. It's available now at some of the top sites which use Play'n GO software and games.

Rise of Merlin is an exciting game with great features to enjoy, and the theme of the game only adds to the player’s enjoyment, and that’s what we want.”