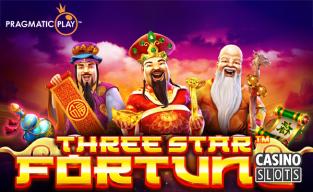 The Three Star Fortune slot is new from Pragmatic Play. It has richly decorated reels and an Oriental theme, that sees the Chinese Gods of Wealth triggering features such as expanding wild symbols and respins. Players can increase their wealth by up to 500x thier total stake if the Gods are in their favour.

This is a high variance game that plays out over 5 reels and 10 paylines. It pays out from left to right and right to left with 5 of a kind combinations paid from both sides simultaneously. Symbols include Chinese characters, scrolls, and golden bowls. The 3 Gods each appear on their own reels in the middle of the game, and each is a wild symbol that can substitute for others to complete combinations.

The Gods also expand over their reels, making it easier to create wins. Wilds also lock in place as other reels respin. If another wild appears in the respin, it also expands, then locks onto the reel. If the third wild then lands in the following respin, it fills its reel and the total payout is then made.

This mobile-compatible game has a theoretical RTP of 96.27%. Players can spin the reels for between 0.10 and 100.00 at sites featuring the Pragmatic Play range from now.

“Three Star Fortune is undoubtedly a valuable addition to our slot portfolio. “With a highly appreciated theme, Expanding Wilds and massive win potential, players will be keeping a keen eye out for the ancient Gods of Wealth.''