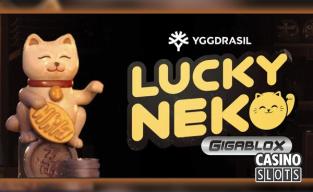 The Lucky Neko Gigablox slot from Yggdrasil is the first to use a dynamic new Gigablox mechanism. Reel sizes can change from spin to spin, and giant Gigablox symbols can appear. These fill 2x2, 3x3, or 4x4 sections of the 6 reels, helping to bring in some big wins. During a free games round, Gigablox can almost fill the entire game!

The game is set within a dark Japanese shop, filled with vases, Bonsai trees, and a traditional waving cat statue. This lucky cat also appears on the reels, along with bowls decorated with playing card suits, and Japanese masks. The highest-paying symbol is worth up to 8x the stake. A golden dog mask is a wild symbol which helps to complete combinations across any of the 40 paylines when it appears in the right places.

Gigablox can land in any spin, filling sections of the reels and making it easier to see a winning sequence across the game. A free spins bonus symbol launches one bonus game for each example landing in the triggering spin. Players need at least 5 free spins symbols, but could see as many as 24 at once.

The reels expand from 4 rows to 8 during the free games, giving players 85 paylines. Before the games begin, a random symbol becomes 'Blessed' and any wins from it are multiplied by 5x throughout the feature. Gigablox can now vary in size from 2x2, all the way up to 6x6, which fills all but 2 rows of the expanded reel set.

Released on 24th June 2020, Lucky Neko Gigablox is the third Yggdrasil game this year to have a special payout mechanism. It follows on from the Splitz, and Multimax systems.

This is a medium to high variance game with average returns of 96.4%. Players can stake between 0.08 to 100.00 per spin and access Lucky Neko Gigablox on PCs and mobiles at some of the top casinos.

“Every spin of Lucky Neko Gigablox™ is a joy to play. With the Gigablox reels the next big win is just around the corner and the free spins offer some serious win potential from time to time.