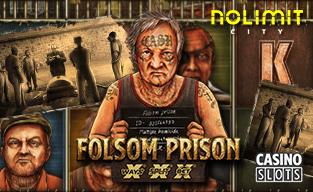 Folsom Prison is the latest slot from Nolimit City. Various inmates feature across an initial 5 reels and 2 rows of symbols, but players can unlock cells above and below the reels to build up to 46,466 ways to win. It features the popular xWays and xSplit systems plus two levels of free spins where players can win up to 75,000x their stake.

The real Folsom Prison in California is perhaps best known as the setting for Johnny Cash concerts in 1968 and the guitar-heavy soundtrack fits right in.

An ‘Extreme’ level of volatility combines with the potential for vast wins at any time. Extra features include wild symbols and cockroach wilds that scuttle across the reels to add multipliers to random positions. xWays symbols unlock cell doors to increase the number of ways to win, while the xSplit feature doubles the number of symbols on any row before turning into wilds.

Three scatter symbols launch a Walk The Line free games round that plays out on expanded reels and cockroach wilds appear in each spin. Four scatters will trigger The Chair free spins, where the reels start with 4 symbols each, and 3 cockroach wilds are always active.

Player can now unlock the gameplay and features of the Folsom Prison slot machine at desktop and mobile sites that carry the Nolimit City range. Other games from Nolimit City include the similar San Quentin xWays, and the Das xBoot slot machine.

A Prison that’s become immortal by one of the best albums of all time, was a big inspiration for this title. A San Quentin- light if you prefer, but it’s so much more than just a prequel.