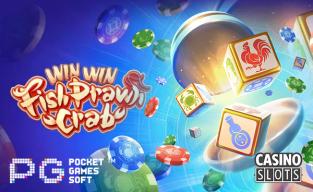 Win Win Fish Prawn Crab is a brand-new slot from games developer PG Soft. It’s based around a popular dice game that is played widely across Asia, where players roll dice to reveal any of 6 emblems.

Pocket Games Soft has expertly converted this traditional pastime into a 6-reel slot game that players can reach on PCs and mobiles. It’s a colourful game where fish, prawn, crab, gourd, rooster and tiger symbols feature on the dice, with players winning from enough examples of the same symbol on connected reels.

Features of the Win Win Fish Prawn Crab slot machine include winning symbols that vanish and leave space for those above to drop into. If this cascading reels mechanism forms a new win, it repeats, with no upper limit. A win multiplier increases with each cascade, and there’s a free spins bonus feature where this multiplier continues to increase throughout.

The free games can run and run. Depending on the number of triggering symbols, players get 3, 4, or 5 lives which are lost on losing free spins. But the counter resets on any win, and the games continue for as long as players still have lives left.

PG Soft is a mobile-first developer with a selection of popular and innovative titles in their range. Based in Malta, the games are licensed in multiple gambling jurisdictions and include well-known titles such as Groundhog Harvest, Dreams of Macau, and Phoenix Rises.