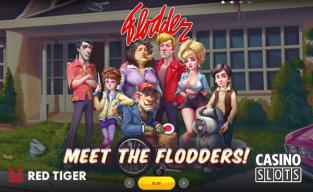 The Flodder films and TV shows are hugely popular in The Netherlands and players around the world will soon be able to enjoy an online slot themed around this dysfunctional family. The franchise started in 1986 and this brand-new game brings characters such as Ma Flodder, Johnnie Flodder, Daughter Kees, Grandpa Flodder, and Whisky to sites using the Red Tiger games package.

A cartoon style brings the family to desktop and mobile casinos with plenty of colour and animations. Flodder is a 5-reel, 25-line game where players can scoop wins of up to 6,500x their stake. It’s the very first online slot based on a Dutch movie and comes with a host of extra features.

These include a free spins round which starts on a grid of 20 bottles, Players pick bottles to reveal modifiers such as juicy wild symbols and saucy win multipliers. Grandpa Flodder can appear at any time, and he adds between 2 and 12 wild symbols to the reels as he rolls past in his wheelchair.

I am proud to be at the source of the first slot game based on a Dutch film. Red Tiger and Evolution did a fantastic job of incorporating the action, humour and energy from the Flodder movies and TV series into the game.