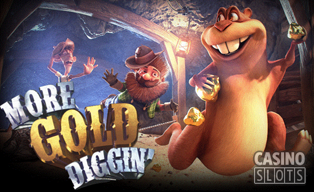 High quality, true 3D igaming entertainment, the bedrock of our vision for the industry, released in tandem with the mobile ToGo version.

Betsoft Gaming has released a sequel to their Gold Diggers slot game called Gold Diggin’ II: More Gold Diggin’.  This new video slot game has not only been released as one of their impressive Slots3 games, but is also available to play on the go using their ToGo Mobile platform.

More Gold Diggin’ is a 5 reel and 25 pay lines game that follows the adventures of two brothers named; Cletus and Jeb.  Cletus and Jeb are miners, who are always trying to keep their gold out of the paws of an incredibly naughty Gopher.  Players get to help the brothers match up different precious elements on the reels (Diamonds, Silver and Gold etc) whilst also enjoying the games glorious 3D graphics.

Features in the game include; Cascading Reels that can pay out up a 5x win multiplier for consecutive wins, a Double-Up Mini Game, a Free Spins round and a Dynamite Wild symbol that can help you make up winning combinations.

What will you uncover in the brothers mine?