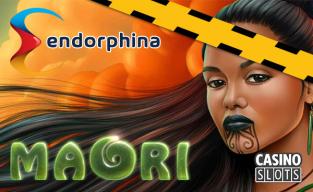 The usage of cultural concepts and iconography is a very touchy subject. You can never really tell how people are going to react and if their response will be genuine or fueled by the hyper-politically correct behavior that is fashionable among certain circles. In the case of the controversy surrounding Endorphina's Maori video slot, it seems that most of the complaints were more on the legitimate and understandable side, even if it doesn't follow the pattern that similar previous titles by this provider established.

Why the Game Was Pulled

At the end of 2016, Endorphina released the Maori online slot. While it had some extremely high-quality graphics and was one of the most visually appealing titles out there today, not everyone was happy with the celebration of the New Zealander heritage. Unfortunately for Endorphina and for players who enjoyed the game around the world, there were certain tribe authorities from the country that were not happy about the theme of the game and it being used without them being given notice ahead of time.

The biggest blow probably came from the Maori public health agency Hapai Te Hauora, who publicly demanded an apology and the pulling of the game from the Endorphina portfolio.

It's important to note that Endorphina previously released the Urartu slot, which was similarly based on the culture of Armenian people, and they received great fanfare from Armenia and people from across the globe as a result. Every situation like this is different, and it just goes to show how unpredictable these types of things can be.

The plan for Endorphina for the time being is to pull the game and rebrand it so that it does not use as much from the Maori people. The game will most likely be relaunched in the future after these changes are made, which is easy to understand since they spent over a year developing it. It's not clear what changes will be made, but it would be foolish at this point for them to abandon the game completely if they believe they can remove the visual elements that upset certain groups of people. This isn't the first time this company has had controversy surrounding one of their releases, and it most certainly won't be the last.