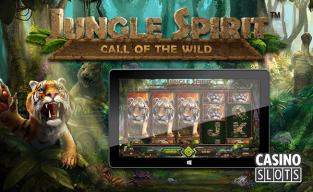 There's always a buzz whenever Net Entertainment releases a new video slot, and rightfully so: They virtually never disappoint. This is definitely the case with their most recent release, a game called Jungle Spirit: Call of the Wild. This game has a jungle theme, obviously, but it uses some animals that you wouldn't normally see in a game like this, like butterflies.

The Format of This New Game

NetEnt has decided to go with a 243-ways format with this game. That means there are five reels with three rows, and each symbol pays out like a left-to-right scatter. This is a recipe for the foundation of an action-packed game, and from the list of available features, it seems like action and suspense is exactly what they have went for. It also has incredible graphics, which this software developer is already known for, so that isn't so surprising.

Features in Jungle Spirit: Call of the Wild

The Butterfly Boost feature is the one we're particularly excited about, even though there are also free spins. The way this feature works is that, if you get a winning combination, if there are no scatter symbols on the reels, then you can see butterflies come land on reels at random giving you a chance to have up to three winning symbols expand. This will give you up to 27 times the normal total win from a particular winning combination, and that's an interesting approach to expanding symbol features that we can't remember having seen before.

Net Entertainment is obviously pushing hard with new releases to keep up with the momentum that they built up during 2016. Jungle Spirit: Call of the Wild brings both great graphics and awesome, high-action gameplay together in the same package to give players a lot to look forward to, and it's just another example of them jamming the online slot world with great new releases. It's going to be hard for any of the competition to catch up with them at this point, and that's likely to be exactly the point.

Press Release, NetEnt Serves Up a Feast for the Senses With Jungle Spirit: Call of the Wild netent.com, March 21, 2017