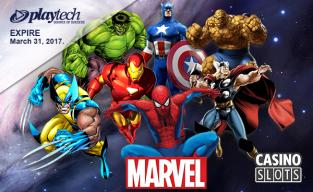 Games based on characters and themes from Marvel have been used at Playtech-powered online casinos for a long time. However, their existing licensing agreement is coming to an end on March 31, 2017, and that means that all of these games are going to be pulled as a result. This includes a few dozen titles, and the complete Marvel Jackpots line of progressives, but Playtech has a plan in place to replace at least the progressive jackpot slots.

Games to Be Pulled

There are two main categories of titles that are expected to be pulled as a result of this licensing deal expiring. The first group consists of over a dozen scratch-off titles including Blade, Captain America, Daredevil, Elektra, Fantastic Four, Iron man, Spider-Man, Wolverwine, X-Men and others. Likewise, the second group consists of titles from the Marvel Jackpots line of games that include all of the same characters.

The progressive jackpot games are particularly important because they have been some of Playtech's most popular slots for quite a while. They all have four linked, progressive jackpots, and the top jackpot pays $100,000 at a minimum. There's a chance to win any of the progressives with a bet at any size, which was a big part of the appeal for low-stakes players in particular. Playtech will be replacing this experience with the Age of Gods slot series with progressives set up to cover the upcoming gap in available progressive slots.

Marvel Comics is one of, if not the single, most popular sources of comics in the world. Playtech, on the other hand, is one of the most popular and most successful producers of online gambling software, including slots. The pairing between the two came after Marvel had a similar agreement for years with CryptoLogic for a set of progressive jackpot games that were similar, but those only had three jackpots instead of four. Moving forward, it's unclear to see if Marvel will ink a deal with another software provider, but that could prove to create some particularly interesting games if it comes about. We'll have to wait and see what Marvel decides to do, but Playtech's strategy is already clear with the Age of the Gods games.