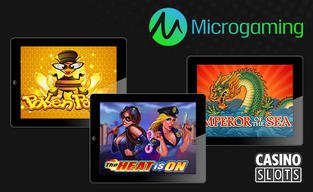 In the online casino world, Microgaming is one of the undisputed kings. Their software was used in the original online casino back in 1996, and they officially kicked off the entire industry. They are still going today, and they are still known as one of the top names, particularly for online slots. They have three new titles coming out in March 2017, and they cover a variety of concepts and motifs.

The Pollen Party slot is the first game. It has 720 ways to win with an atypical, honeycomb layout. The reels are a bit different, and players will have multiple scatters for free spins and other special prizes like instant wins. Along with that comes Emperor of the Sea, a game with five reels and four rows. You can play with 38, 68 or 88 paylines, all representative of important wealth-based numbers in Asian cultures. Stacked wilds show up on every reel for lots of chances for multi-line wins no matter how many paylines you play with, and it has the Rolling Reels feature for multiple payouts on individual spins.

Finally, there is the third title The Heat is On. It uses five reels and three rows for a more typical layout in that sense, but there are 45 paylines, which is pretty atypical. This is all about a thief names Selina and Officer Jean, who is tasked with tracking her down. It's a high-action affair with multiple wilds and scatters and the chance to trigger up to 80 free spins for some incredible total winnings.

Both Pollen Party and Emperor of the Sea have a March 1 release date, but The Heat is On will be released on March 22. This shows that Microgaming knows how to stagger their releases a bit so that everything isn't coming out at once, and this gives players more of a chance to try out everything new that they have to offer. With three new titles coming out, at a minimum, this month is sure to be great at online casinos that use their software.