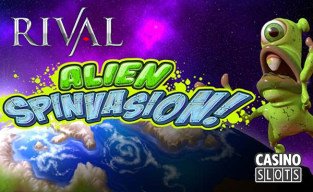 People have always had an obsession with the idea of aliens from another planet coming to Earth, and Rival Gaming has taken advantage of that obsession with a brand new video slot. This game is called Alien Spinvasion, and it has a very feature-packed style of gameplay with a lot of ways to hit winning combinations, including ways to win several times in the same spin.

The first feature in this game that you should definitely know about is a sort of re-spin feature. Whenever you hit a winning combination, you're paid out normally. Then before the next spin begins, a laser beam will come down and shoot all of the winning combination symbols, causing them to explode. This allows new symbols to fall down in place of them, which gives you another chance to win. Moreover, you'll have a multiplier increase from 1x to 2x, 3x, 5x, 7x and 11x for chances to get even bigger prizes with each re-spin you earn on a single paid turn.

Lots of Ways to Win

On top of that, there's also a free spins bonus feature that can get you several free spins. However, a lot of this game's high hit-rate really just comes down to the basic format it uses. There are five reels with three rows of symbols, which is about as normal as it gets, but there's a whooping 50 paylines of action. Add this to the exploding symbols feature with multipliers listed above, and you get even more ways to win. To kick it up to yet another level, you can get sticky wilds that will stay on screen through your re-spins to give you a tremendous amount of value.

Rival Gaming has been doing pretty well for the past couple of years, and they've built up some momentum with their releases. Alien Spinvasion is a good example of another game along those lines, and its high hit-rate and feature-rich gameplay style will definitely appeal to players. The graphics are average to above-average, but it loads extremely quickly and will give players a lot of replay value.