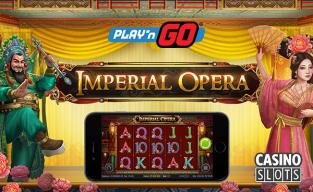 A Chinese opera house is the richly-decorated setting for Imperial Opera, a new slot game from Play'n GO that comes with suitably rich bonus features, such as locked reels, wild reels and stacked symbols, plus a free spins round.

Raising The Curtain On Imperial Opera

Beautifully detailed images are seen across the 5 reels of this game, extending to a background picture of stairs, seats and stage curtains that helps to set the scene. It's a 20 payline game that sees playing card symbols adorned with flowers creating the lower value winlines, while 3 male opera singers in traditional costumes are worth the higher payouts. The Princess is star of the show, and she is a wild symbol, able to act as any others if she can complete combinations.

Any symbol can appear in a giant 3x3 form, potentailly completing multiple high-paying combinations at once, but there's also a series of randomly-awarded features that can occur in any spin. In the Harmony feature, 2 or 3 reels will spin up the same symbols, boosting the chances of getting winning combinations from them, while the Showcase feature sees a random symbol stacked on any reel that it appears on. If the Crescendo is awarded, players will get 1 or 2 reels filled with the Princess wild symbol.

A separate free spins round is launched from within the Harmony feature if a 3x3 symbol of a gong appears. 10 extra games will play out, and these can be retriggered if this gong symbol stops in any 3 or more places before they end.

To help players land extra winnings throughout the free spins, reels 2, 3 and 4 will be locked together, with the same symbols in the same positions across them all.

Imperial Opera is now available at Play'n GO powered casinos, across desktop and mobile platfroms, as well as at land-based casinos. It features the OMNY tool, which tracks a players progress when they move from land to online sites, and comes with high-end graphics, as well as a quality soundtrack.

We’re excited to launch yet another regionally-targeted slot to our rapidly expanding portfolio in Imperial Opera, and we’re sure players will enjoy the concept and premium gameplay.