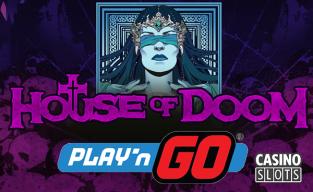 House of Doom has been announced as the latest slot game from multi-platform developer Play'n GO. It's going to be something different from the usual type of slot however, as it's been developed in partnership with doom metal band Candlemass, who have produced exclusive music for the game.

The unique tie-in with Swedish hard rockers Candlemass is going to make House of Doom a big hit with their fans, with an interative game that not only has a unique soundtrack, but will also see the band participating in marketing events and social activities to promote the launch of this special slot.

House of Doom will initially be restricted to certain online and mobile casino operators, but after a three month period, will be made available to all Play'n GO sites.

It has been a pleasure working with the renowned Candlemass on the launch. The band have contributed heavily to the creative process and we believe this partnership paves the way for a new way of marketing slots in future.

About House Of Doom

This 5 reel, 10 payline game features plenty of heavy metal inspired symbols, such as pentagrams, flaming roses, a cross wrapped in barbed wire and skulls. A wild symbol will appear in each spin, expanding across any reel that it lands on, while the game logo is a scatter symbol.

A Skull of Abyss bonus round invites players to select from a range of skulls to reveal instant rewards or to enter a free spins bonus game. During the 10 free spins, the scatter symbol becomes and extra wild, and between 2 and all 5 reels will become filled with expanded wilds in each bonus game.