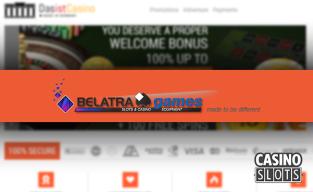 Something we see a lot in the online slots world is companies that have traditionally only serviced the land-based arena deciding to produce Internet slot titles. BELATRA has been running along these lines since 1993, and now they've decided to jump into the online side of the industry. They'll be doing this through a deal with SOFTSWISS, and the first site to get their games will be Desist Casino, a site centered in Germany.

The first thing to understand is that BELATRA already has worldwide distribution with tons of games going to places as far apart as Russia and Central America. With well over two decades of experience in making slots and other games, they also have a tremendous amount of knowledge about what trends players tend to like and what tends to make a good game, so they could very easily leverage that information to get a head start in the online side of the industry.

Nature of the Platform

Another critical part of this deal is that SOFTSWISS has seemed very eager in making this deal, and that goes to show how much faith they have in the company. SOFTSWISS is not in the business of making losing bets when it comes to the software developers they partner with, so it's obvious that they have high hopes and a high level of respect for the land-based company. To this end, we expect some solid titles to come to the online arena based on this relationship, through there has not been any specific release schedule given at the time of this writing.

For companies who first enter the online market after having a significant history in the land-based one, a common approach is to create Internet slot versions of their most popular games first. This gives them a starting base of games that they can expect to have some degree of success, and it gives them time to develop online-specific titles as well, if that's something that they decide they want to do. It's happened a number of times, and while we aren't sure because of the lack of details on a release schedule, we wouldn't be surprised if this was the route that BELATRA took.